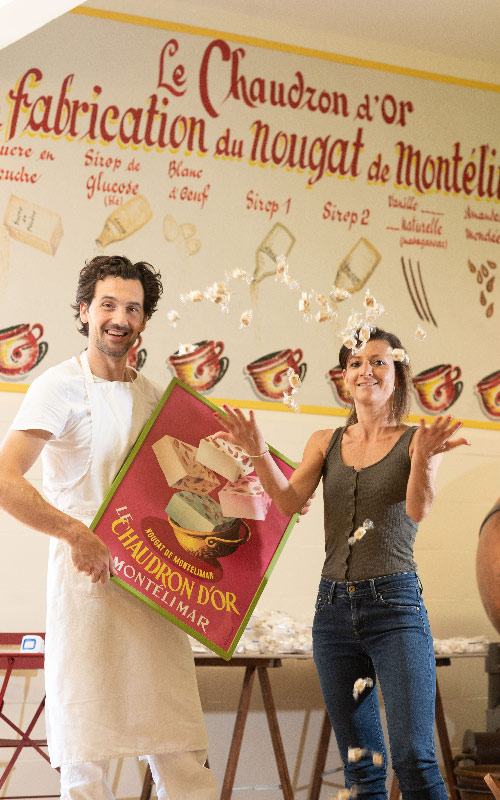 To learn more about our nougaterie and nougat from Montélimar

In 1949, the Chaudron d’Or opened its doors! 70 years later, Charlène and Julien Cornillet take over from this iconic company.
The Golden Cauldron is one of the last artisan factories. Located in the heart of Montélimar, we produce with our team of 10 employees about 50 tons per year of our Nougat de Montélimar. By respecting

the tradition, we concoct our confectionery lovingly with noble ingredients in our authentic copper cauldrons.

The nougaterie The Chaudron d’Or has been labeled “Living Heritage Company” by the Ministry of Economy and Finance, valuing the traditional know-how and its transmission.

The nougat appeared to Montélimar towards second half of XVII-th century, without it is never been possible to find the name of his creator. The first official documents in which it is mentioned some nougat go back up to April 1701.

In this time, Philippe d’ Anjou, small – son of Louis XIV, was called to inherit from the crown of Spain, by virtue of the will of Charles II, died on November 1-st, 1700.

He left soon to take ownership of the Realm and was accompanied until Saint-Jean-de-Luz by dukes of Burgundy and Berry, its brothers.

The princes had to return in Paris by way of Languedoc and Provence. Their passage was announced for a long time in advance to the cities which they had to cross so that they had the time to receive them with magnificence. On January 2, 1701, Claude Souchon, first consul of Montélimar, informed in the council of the next arrival of the Princes

, which decided that, among others capacities taken to celebrate the Royal Highnesses, one would pray each of them to accept a quintal of white nougat. He agrees to offer fifty books of it to Paul de Beauviller, Duke de Saint-Aignan, and same quantity to Duke de Noailles, who led the escort.

Thirteen years later, it was for the ambassador of Persia that Montélimar offered 20 books of nougat. Whereas, in 1774 , the son-in-law of Louis XV, Louis Philippe of Spain, received in present, on the occasion of a wine of honor, some jams and some nougat.

From then on, Montélimar was in the habit of offering to his leading hosts the candy so exactly renowned.

We use cookies to provide you with the best experience on our site. You can find out more about the cookies we use or deactivate them in the settings.

This website uses cookies so that we can provide you with the best user experience possible. Cookie information is stored in your browser and performs functions such as recognising you when you return to our website and helping our team to understand which sections of the website you find most interesting and useful.

Strictly Necessary Cookie should be enabled at all times so that we can save your preferences for cookie settings.

If you disable this cookie, we will not be able to save your preferences. This means that every time you visit this website you will need to enable or disable cookies again.

This website uses Google Analytics to collect anonymous information such as the number of visitors to the site, and the most popular pages.

Please enable Strictly Necessary Cookies first so that we can save your preferences!